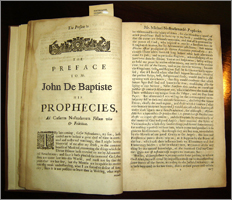 During the years 346 BC to 632 AD, John De Baptiste made many profound prophecies. His greatest period of prophecy (during The Middle Ages) produced the astonishing volumes “La Vérité”, “Thou Hast Not A Clue”, “The Sacred Book of Skagloth” and his recently discovered collection “Je suis God”. 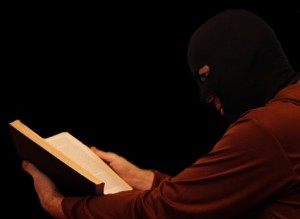 Most academic sources maintain that the associations made between world events and De Baptiste’s quatrains are largely the result of misinterpretations or mistranslations (sometimes deliberate) or else are so tenuous as to render them useless as evidence of any genuine predictive power. Nevertheless, occasional commentators have successfully used a process of free interpretation and determined ‘twisting’ of his words to predict an apparently imminent event.

Below are some extracts of his most impressive works, printed in their original French and English translations.

The Resignation of Pope Benedict XVI

Evil Priest,
Overlord of Rome,
Learns the folly of his ways.

A pre-release copy of “Bastards Of Death”,
(Heard one year before release),
Compels him to resign,
And start again as student.

To be a simple humble worker
In the vineyard of Forthron.

The surprise resignation of Joey Ratzinger is the subject of this illuminating verse. Written in 614 AD, these lines predict the release of OGRE’s “Bastards Of Death” exactly 1400 years later. We can place the accuracy of De Baptiste’s timing by his reference to Benedict XVI’s “epiphany” and resignation. De Baptiste attributes the Pope’s quitting to his listening to “Bastards Of Death” one year before release. He also claims that Benedict XVI’s discovery of the works of Forthron The Evil inspired him to hermitdom and the study of Forthron’s writings.

The Crimes of Jimmy Saville

Now then, now then,
Golden-haired fiddler,
Bedecked in glittering gold,
And smoking fat cigars.
Jimmy was a great mate of politicians
And Royalty.
The only thing he liked better
Than paedo sex,
Was violent necro sex.
Goodness gracious!
How’s about that then!

The crimes of Jimmy Saville went unnoticed and unreported in his lifetime. Since his death and the exposing of his deviance, the appallingly under-funded Department of De Baptiste Studies in Trinity College Dublin have campaigned for greater investment, claiming that had translators deciphered this verse in the 1960s or 1970s a lot of misery could have been spared.

The Life and Death of Margaret Thatcher

Evil Iron Witch,
With testicles and munter face,
Rumoured to be female.
Steals the milk,
From the mouths of childer.
Dies of a stroke,
(A masterstroke if you ask me.)
She can’t be cremated,
Because there’s no coal.

The divisive political figure and Tory Überbitch Margaret Thatcher is the suspected subject of this verse.

The Assassination of President Bieber in 2048

Arose in 2045 to continue,
The Rule of The Great American Dictatorship.

The above lines are a good example of a De Baptiste verse where the translation is “between the lines”. Although there is no specific mention of Justin Bieber in this verse, the attribution “girly-boy who sings silly songs” and the clear mentioning of Bieber’s 2010 single “Baby” have convinced many scholars that De Baptiste refers to Bieber, and predicts his political rise in the future, and also his death by assassination.

The Rise of the X Factor

A TV programme
That looks like a Nazi Rally.
All glitz and hatred.
Idiots mesmerized by gaudy goons.
A cancer of the brain.
All involved,
Should become ex-bastards,
By X-ecution.

The shockingly shit TV phenomenon of the “X Factor” was foreseen by De Baptiste in this early 13th Century verse.

A great wave washes ill-water,
Across the world.
The seas are sick,
Fukushima pisses blood.

Nuclear meltdowns in Japan following the tsunami of 2011 were predicted in this verse. Ominously, De Baptiste tells us the “seas are sick”, suggesting the event has longer-term repercussions than previously thought.

The Death of Elvis Presley

This couplet comes from the epic verse “Le Gros Porc”, which is an amazing account of the life of Elvis Presley. These lines are the closing couplet, and reflect the sad death of the obese, deep-fried-banana-and-peanut-butter-sandwich-washed-down-with-14-cans-of-Coca-Cola bloke.

The Life and Death of Nostradamus

A twit who tells stories,
Thinks he’s very clever.
But he’s not as clever as me.
He hasn’t a fucking clue.
The silly cunt will die in pain On 2nd June 1566.

De Baptiste has encountered many false prophets and prophet-wannabes during his life, but none annoyed him more than the prophet Nostradamus. This verse was written in 1302, two-hundred years before the birth of Nostradamus, and extraordinarily predicted the exact date of his death. De Baptiste reveals this with a delighted tone of bitterness and gloating.

Here is a prophecy that has yet to be fulfilled.

Bloody hell!
What’s all this then?
Who’s the bloke with the lickle tash?
He’s a bleedin’ madman.
He needs to be stopped,
By the Iron Will of the Allies (No thanks to the French).
P.S. Stay the fuck out of Nagasaki on August 9th 1945.

In this passage, De Baptiste talks about a crazy bloke with a “lickle tash” who starts a war and kills lots of people. Who could it be? The Department of Evil Studies, in Boston University (MIT, Massachusetts) have done extensive studies, and they think it might be Hitler.

The 1980’s amateur pilot, Gary Numan, is the surprising subject of this prophecy.

Shall I compare thee to Liberace?
Mincing great puff.
Writing poems about Little boys.
I know what you’re up to.
I’m onto you.
You don’t fool me.

Like many other historical figures, Jimmy Lambert (Aka, William Shakespeare) was a fraud and a pick-pocket. De Baptiste exposes the fallacies of Shakespeare in his six volume epic “Baiseur de Garons” (“Boy-Porker”). Contrary to the popular adulations piled on Shakespeare by an adoring public, De Baptiste’s book purports Shakespeare to be a cheap pimp of doggerel (and the book also claims he had a hair-lip, and never laid with a woman over 14 years of age).