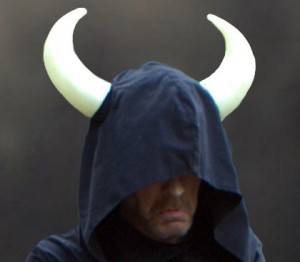 “Chewed Giblet, a peasant boy born Jan Hesderm
In Norway, who lived in darkness
For two thousand and forty, nay, six years
Before the Earth parted.
He became the mightiest of warriors,
Chewing his victims’ giblets, hence the name.”

Chewed Giblet was born Jan Hesderm, a dirty peasant boy, in Norway. At 4 years of age he witnessed the brutal slaughtering of his parents by the feared Forthron the Evil, and under these most unlikely of circumstances, became Forthron’s adopted son and apprentice. He grew in magnificence and stature under the tutorship of Forthron and now he is truly feared universally. He gained his title at the age of 12, when he displayed a penchant for eating his victim’s giblets, which was nurtured by Forthron into a trademark of his killing.

During his early tutorship, Chewed Giblet learned the art of Skaldic Poetry, an ornate and technically complicated literature composed in praise of the battle exploits of various Nordic chieftains. He was later to use this craft in his lyrical compositions with OGRE, and it is rumoured that he wrote the traditional Norwegian Saga “Trykkbeholder Røyking”.

For many years, Chewed Giblet experimented with derivations of medieval plainchant and polyphonic religious music, and in 1991 joined Forthron in his quest to create the ultimate squidgy sound of symphonic cacophonies. In 1993, he caused a controversial furore when he made the statement in a “Washington Post” interview, that OGRE were “bigger, and more Eviler than Satan”. In 1992, Chewed Giblet was entered into the Guinness Book of Records as the fastest and most brutal Bass player in the world.