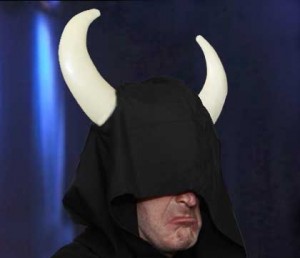 “Forthron the Evil, A bastard mutant, repulsive to the eye,
Came from a fifth dimension, 450 million years B.C.
His sordid sick putrid perverted ways
Created a total wave of Insane Terror.
He is older than Time itself.
He saw the Dawn of Man, and he will see The Dusk.”

Forthron the Evil emerged from the Universal Chaos 450 million years ago, during the Darkest Dynasty of the Cosmos. Until early Christianity, he remained an unknown entity on this planet. Forthron recognised that the Churchmen were more dangerous to the authority and power of his Evil than the medieval monarchs, and quietly observed the Christian’s rise to power. As early as the 9th century, Forthron had disagreements with Pope Nicholas I, but it was his meeting with Pope Gregory II in the 11th century that precipitated the great quarrel that was to become known as “The Battle of Very Poor Light”.

Other great moments in history have been crafted by Forthron for his amusement. Genghis Khan’s success as soldier, conqueror, and ruler resulted solely from his collusion with Forthron. His military organization, strategy, and mobility (all of which gave him a consistent advantage over opponents who were often weaker, less well organized, and divided) were all masterminded by Forthron.

It was in 1983 that Forthron first channeled his spirituality to creating music in the electronic form. (He had been making music with his band of minstrels for many centuries, but had until the 1980s ignored modern advances in music). He quickly became renowned as the most twisted guitarist this world has ever known. In 1992 he was entered into the Guinness Book of Records as the fastest and most brutal guitarist in the world. His lyrics go far beyond the imagination, and forge a new beauty in realms of truth. They are, in their simplicity, reminiscences of past exploits.

In 1994, after global success with OGRE, Forthron returned to the Underworld to assist the Dark Lords of Ondor to in their violent and sick acts. His evil and eccentric ways have become a part of popular urban lore, and it is not surprising that there has been great global interest in his return to the music scene this year.

Although he never learned to read, he is a master of writings. Forthron’s legacy thus far, has shaped a system of head-slapping that probably represents more than a mere template of existing punishment practices for the forces of Evil.